Hiiiiii you guyyyyys!  So it was a really rough end to the week last week.  Jenny mentioned that I had an incident during our workout Thursday.  I don’t actually have asthma. I grew up with chronic bronchitis which resulted in frequent trips to the doctors as well as the hospital, lots of time under an oxygen tent and my own at home “machine” that helped me breath!  So anytime I got sick it came with raging bronchitis and forced rest!!!  The breathing machine that I would use was full of albuterol which if you’ve ever experience that..it jacks you the fuck up!  And as a kid all you want to do is be on the go anyways so it is especially torturous to be sick but full of synthetic energy!!! Needless to say I never really played sports growing up except for my short lived stint in gymnastics…

but my lungs couldn’t handle it. Maybe this was the beginning of my sedintary lifestyle!?!  Here are some pictures of us on vacation…I was such a happy active kid …

I was a little too active and got myself sick and this was the result!

I hated the attention that it brought about too, (I know that seems shocking that I would hate any kind of attention haha) people feeling bad for me or me feeling like a victim  myself or  feeling incapable of doing certain things has always made me feel uncomfortable and honestly angry.  This is the kid I wanted to be all the time…swimming, playing…riding bikes…running around…being at the park and just being flat out adorable winky face! 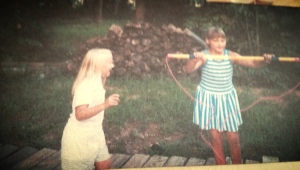 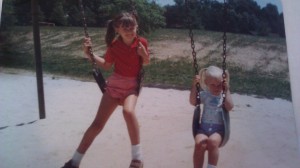 But more often than not, I was this kid.  You can’t really tell how sick I am in the picture but just looking at it I can remember falling asleep at the table at Daryl’s bc I just couldn’t breath. I’m not not posing for the picture…I’m just miserable.

So I eventually grew out of the chronic bronchitis but around 17 it turned itself into another condition where sometimes (usually only when my allergies are really bad or when it’s cold outside and I’m overly active) my lungs constrict and I can’t breath out, which causes coughing fits which means I can’t breath in.  This literally never happens and hasn’t happened in so long  that I don’t carry my inhalers with me…like ever!  I think bc I felt so restricted and angry as I mentioned above at feeling different and sickly as a child I really wanted to rebel against everything so around middle school I tried smoking and around high school I was a pretty regular smoker. #worstdecisionoflife #theabsoluteworstwaytorebelever

I’m not sure what I was thinking but I have never liked being told what to do…and I will usually do the opposite…even to my own detriment obvi!  Now that I have quit smoking and drinking i have really been able to clearly see how I kept myself sick for so long.  I honestly just had decided that I was a person who got sick a lot and that that was just my lot in life.  And at the time while I was partying my face off you couldn’t have made me understand what role I was playing in that hand of sickness.  Perspective is so amazing.  I haven’t been sick once since I quit smoking.  So Thursday morning came as a big surprise and I was woefully unprepared. I have learned sooooo many lessons lately.  But on Thursday I learned that during a health crisis pushing through the workout is not my smartest move…like ever!  It was literally the dumbest thing on the planet.  There is this strong part of me that wants to be 100% capable all the time…probably bc of childhood incapabalities!  Buuuuuuuuuuuut, if you can’t breath…you can’t workout…or live you dumbass.  Jenny knew it was bad and I don’t know why I pushed through but as soon as we got into the car I burst into tears.  Not being able to breathe is so panic inducing and I just couldn’t calm myself down enough to get the air in!  Jenny is so amazing and her mama bear instincts came out and she made me calm down and just focus on that.  I don’t know what I would do without her.  Sooooo, lesson learned.  It took me a couple of days worth of both inhaler treatments to feel back to normal but I’m back.  I also learned this week that I am completely capable of realizing that I have gotten off track and am able to get myself back on the right path.  I started the week off getting back to my smoothies!!!

Thursday night Zan and I went to a bluegrass festival downtown.  The music was awesome and the local brewed beers were flowing (just iced coffee for me thanks)! 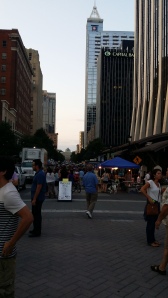 Then we walked all over and finally decided to have dinner at Sitti!  They had a surprising number of healthy options.  It turns out that I don’t have to order steak frites every time I leave the house!  I am COMPLETELY capable of being a grown up and making good decisions. #whoknew

He orders the most adorably named drinks…tonight was the Bee’s Knees bahahahahahaha! 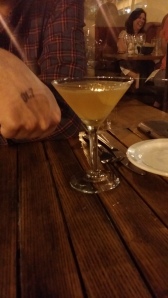 We shared kabob’s for dinner…steak, chicken, kafta and shrimp with yummy veggies and fingerling potatoes!!!! It was so healthy and so good I forgot to take a pic until it was almost gone…#goodsign! 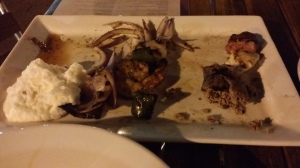 Then we walked around some more #activitypoints and enjoyed the beautiful weather that has so unseasonably shown up.  I have come to the realization that checking in with myself and reigning myself in is going to be a lifelong thing and its actually what is going to help me find success and my ultimate goal in the end.  #strugglebusnomore #breathingfine #capableofchange

So the breakdown in the workout was super unpleasant but really a really valuable reminder in the end of how far you can come and that frequent reality checks are worth it.  Sometimes you just have to reframe your plan. Xoxoxo

Godinterest Magazine covering faith, culture, life and all that other stuff