I had a lot of revelations this weekend. This is Sara!!!  Hiiiiiii! Generally speaking I am a confident person.  I don’t generally feel like I limit myself.  I feel capable of so much. But, recently I have realized that I’ve gone through life thinking…wow, everyone else really has their shit together and that I was doing alright but def on the struggle bus for a lot of things. Normal life things seemed a little tougher to me. To me, it always seemed like things came very easily to others…like organization, eating healthy, exercising, school, becoming a grown up through the “normal” channels of getting married, having babies, having a pet, cooking, domestic issues, keeping a tidy car, not murdering people who won’t move up in the Starbucks line in a timely manner and finances.  But in reality, everyone is fighting their own battles and struggling with their own demons.  Most people aren’t as open about things that aren’t going well, bc it’s scary to put things that aren’t perfect out into the world…it’s easier and for sure more fun to talk about what is going right!  I think that that is what felt so isolating to me.  I always felt upfront about airing my imperfect laundry and when no one else chimed in, I assumed that their silence was further confirmation that these things were not a problem for others and that I was indeed a total mess of a child.  But, that just isn’t the case.  Which to me is the most freeing thing!!!!!  I don’t have to do things in this unrealistic Martha Stewart perfection way I’ve convinced myself is right!  I just have to find something that works for me and stick to it…or switch it up when things are no longer working. #freedommmmmmmmmmm Now that I know that everyone struggles, I can shelf that shackle that has been holding me back.  I have also realized that my words to myself are very powerful.  I have lots of truths that I tell myself….I’m not an outdoors-y girl, I’m not responsible enough for children, I’m a bad driver, I’m not athletic, I’m not very domestic, I’m intimidating, I’m not a runner, I’m not a pet person, Maybe I’m meant to be single…the list of my self evident truths is endless.  I don’t want to have limiting beliefs.  My boss Joelle always says, if I don’t know how to do something, it’s not that I can’t do it, I just need to learn how.  Well….genius.  So this weekend I really got outside of my box and signed up for Fleet Feets No Boundaries 5k program.  You guys, this sentence includes so many things I’ve always told myself weren’t a part of my life, like leaving my house…before 8 am on a Saturday…. when it’s 25 degrees…to go be outside…for an extended period of time…to exercise with strangers…to learn how to run…3.1 miles.  I can’t stress enough how much has changed in a year!!!!!!!  I was beyond nervous and soooo ready to bail…especially bc Jenny works Saturdays and she couldn’t be my codependency partner in health.  But I went to Target the night before with Jenny and got a new warm hat, gloves and hoodie, went to bed early and told myself, you signed up for it…you have to go.  And I did. First I put on every single item of clothing I own. #couldibewearinganymoreclothes!? #iliveforlegwarmers 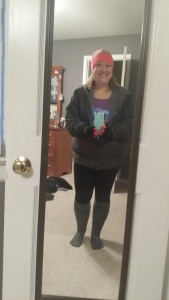 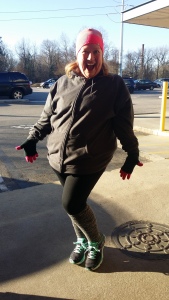 Then I met my sweet pal Karen…doing something with a friend is genius…you are so much less likely to bail! #meatballsub 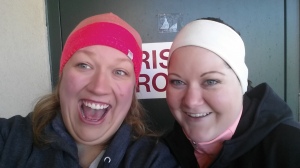 And we stood outside learning about all the different training groups for the 5k program! I actually saw a lot of familiar faces from the Ton of Fun event and simultaneously lost all the feeling in my toes! 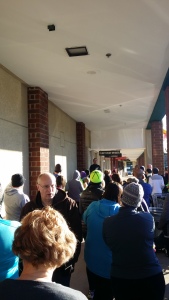 It was fahhhh-reezing balls…then we met with our mentor, Jennifer.  Karen and I being total novices chose the walking group! 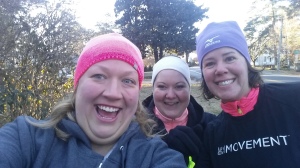 And we were off! 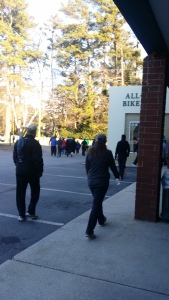 Today was just a mile…kind of a get to know the program and each other day!  Our mentor Jennifer was so great and inspirational.  We walked together and told each other our stories.  She told me how she had gone from never running in her entire life to being a mentor for Fleet Feet.  She got me really pumped and we did a nice, fast paced mile  together and between the conversation and me trying not to become hypothermic , the mile was over in no time! It also gave me the confidence to next Saturday move into the walk to run 2 group!  Jennifer…it was the living best meeting you..thanks for motivating me and to help me believe that I can do this! 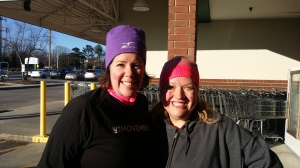 Karen and I survived!!!!  And we had all of our limbs when we came back! 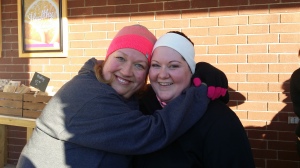 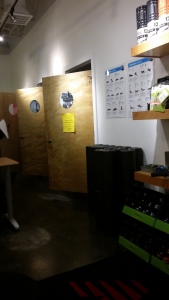 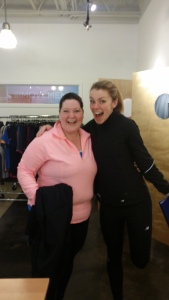 I gained 1.2!!!!!!!!!!!!!!!!!!!!!!!!!!!!!!!!!  More on that later in the week!!! Haha I love you Karen!!!  So glad we are getting healthy together!!!  So on my car ride home was actually when I had all of the above revelations.  As I was pulling onto the Wade Ave exit I thought…how many other things have you held yourself back from bc you decided before you even tried it that it “wasn’t for you”?! I am notorious for telling people…not with that attitude!!!  If you come to me and say I can’t meet my numbers this month I will always say not with that attitude!!!!  But you guys, why wasn’t I saying it to myself?! From now on, I’m changing my story and telling myself I can do anything…and if I don’t know how to do it, I simply have to learn.  Bye bye shackles…I no longer want to be the one holding myself back from all that life has to offer.  Thanks to everyone at Fleet Feet who reached out to these Two Meatballs!  Y’all came into our lives at the perfect moment and the opportunities that y’all have given us have motivated and empowered me to feel capable of more that I ever knew possible.  So, if you find yourself with a bunch of truths…re-evaluate them!!!!!  Maybe you are more than you give yourself credit for.  Last lesson of the day…GET OUT OF YOUR OWN WAY! Love y’all.

The Fun Side Of Science

The leading Christian magazine in the United Kingdom, helping you connect with God, Culture and Life