The cooking segment is back!  #yourewelcomekelly As you have seen from both Jenny and I this month has been a total food fest!!!  So forcing ourselves to cook was a must and a struggle this week! Last week when we were supposed to cook we went out for a sushi date instead, so this week needed to happen!  But we were smart…we cooked the comfiest food of alllll time…crock pot pork tenderloin with cabbage, carrots and onions!!!  First off…nothing is easier than a crock pot meal and second of allllll……yummmmmmmmmm!!! Let me paint a picture of what my cooking fantasy is…Jenny and I jackass around, have so much fun, learn a new recipe  and then we sit down with Brandon and enjoy an amazing little meal that we just prepared with love and healthy vibes. Now,  let me just pop that bubble and tell you that that has literally NEVER happened and tonight was no exception.  Let me paint the reality of cooking night.  I had to work until 8, so Jenny had actually started hours before I got there.  This is the scene I walked into at the Smith home.

Jenny was writing the blog you read yesterday.  I was starving when I got off work so I stopped by Chickfila and got a salad and devoured it at their dining room table solo as soon as I walked though the door! 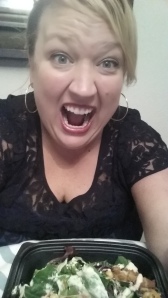 Brandon was glued to the Hurricanes game which he explained thoroughly how the points system works! #iunderstandhockey now #thanksbrandon

The house smelled farty  but somehow yummy for sure…you know what I’m talking about right ladies…house full of stewing cabbage!!!! So how do you make this fall comfort food!?  Here is your ingredient list:

Put slow cooker on low, dump all veggies on the bottom, then lay the pork on top of that,  then sprinkle all the seasonings and then add your wet ingredients and cook for 6-8 hours!!! Jenny literally did all the work here! 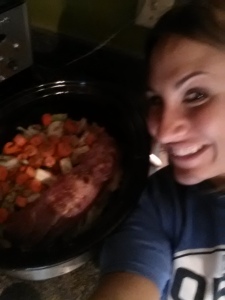 So what are the three best friends who anyone could ever have (did you see what I did there!?) to do while waiting for the pork to cook!? Well snuggle on the couch and act a fool of course.  I used to spend endless hours with these two!!!  This felt great and super duper comfy…the theme of the night! 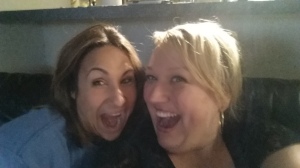 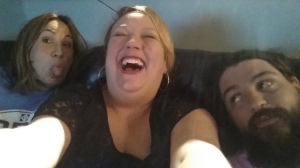 Sooooo fun!!!!  The three of us haven’t been in a room together for more than five minutes in ages and it was soooo great!  We talked a lot about how hard it is to stay focused while losing weight…our major fall cravings, how mean your brain is at sabotaging a good food day and just struggles in general!  Then we watched youtube videos and reenacted terrible commercials! We discussed if you could lose a pound every time you farted that all we would eat is beans for life!!!  #meatballssssss And there was def a moment where we all broke out into “These Boots Were Made For Walking” which turned into a conversation about cassette tapes and Michael Bolton.  Welcome to the land of ADD and 4 city!

Then the timer went off and it was time to sample! #ourfavoritepart #fattypatty’s

It was verrrry vinegar-ey so we added a cup of water to the recipe above.  But it really grew on us and was so comfy and warm! 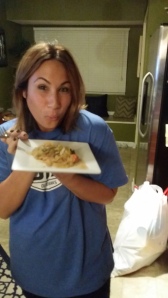 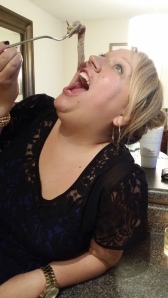 Is there anything better than cooking with friends!?  I think not!!!!  We hope you have a great day and if you are struggling to get back on track just know that we are too… but it is possible and it’s happening as we speak! #allthreemeatballsgetyourheadsinthegame 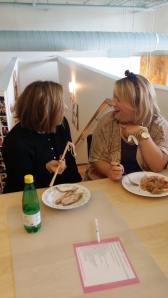 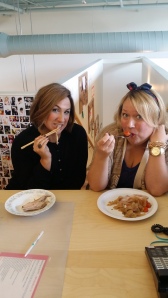 My dream came true the next day…what a lovely little meatball power lunch we had…we are both back and in the mother fuzzing game!!! 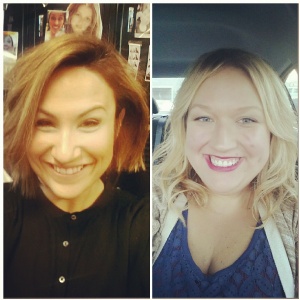 You can feel it from a mile away but it’s ironically a TOTAL surprise.  The texts stop coming in as frequently…you’re not planning future dates anymore. You actually sweetly think that YOU are going to break up with HIM because you find yourself wanting more.  Then Saturday night rolls around and you get the 2014 equivalent of the Carrie Bradshaw Sex and the City post it note break up!

A fucking break up text!!! Annnnnd you are mostly surprised by how much it stings after only three months

but also relieved that its over because the distance and rejection over the last week  felt reallllllly shitty.  Being sober I have had oh so many revelations.  One of the biggest ones was how unknowingly unsupportive I was of my girlfriends during break ups!  I always had the mentality of why would you want to be with someone that doesn’t want to be with you.  I still feel like that, but I didn’t realize that all you want is for someone to make you feel better!  And I don’t know about you, but bashing him doesn’t make me feel better. I don’t need to turn this into anger to get pumped up to move on.  So to all my girlfriends and family members…my bad!!!! I really honestly just didn’t know.  I thought my logic and pointing out all the other persons short comings would make you feel better but it really just makes you feel worse. It feels strange at 31 to say that this is my first time being dumped!  #babysfirstheartbreak For the last decade I did anything I could to keep men at an arms length…only engaging in physical relationships. I was a drunk mess and I didn’t want to be judged or make myself vulnerable. So, when I decided to stop drinking I also decided to give a relationship a go…and I found out sooooo much.  I’m the living worst communicator!  Who knew the girl with the blog would suck so terribly at stating my own needs!  I realized that I love being in a relationship…after the first month of longing to be single bc its what I had known forever and what was comfortable.  I share my space well and I love really getting to know someone.  I love going on fun dates and doing nice things for someone I care about.  It was totally worth putting myself out there to learn how much I like being a part of something . So, I’m walking away with the knowledge that  I am totally capable of being emotionally intimate in a real grown up relationship, I could for sure work on communicating better, I can handle being broken up with with my self esteem in tact, especially when I know it’s the best thing and ultimately I have no regrets. #grown?!

Now, having said all of that…I can’t deny that this was really sad!!!! We never even talked about it…it just eneded…through technology!  But honestly I can’t think of a thing that would have made it better or less awkward.  Another thing that I have learned from being sober is that I am capable of feeling more emotions that just happiness and anger.  I am a very logical person when it comes to these situations.  I wanted more, he wanted less or more with someone else.  That can’t work.  My brain knows alllll of that but with no substance abuse coping mechanism

…I spent some time on the phone with my sister and Katie bawling…saw my parents and cried some more #whoamI?!

By the way I have the greatest people in my life ON EARTH!  I’m so thankful everyday.  The few people who knew really wanted to comfort me and I couldn’t thank them more! #theyknowmesowell

And some time on my couch with my  tissues and favorite meatball were all necessary.  It was time to lick my wounds.  I love my little support system. But what’s next… 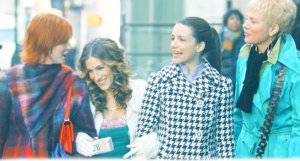 “I couldn’t help but think…(did you see what I did there Nichole LuMaye!?)…What would Carrie Bradshaw do!? Retail Therapy!?

Jenny came to my happy place last week…the beach!  So this week she took me to hers…the mall!!! 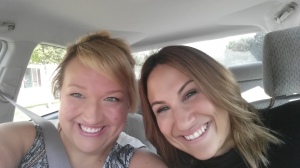 You guys, retail therapy, especially with your best friend is a thing and it feels amazing.  First stop…MAC for a new fall lip!

Then we went to H&M and Forever 21 and we both found so many fall looks! 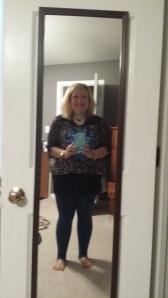 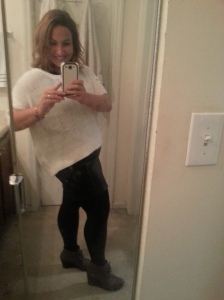 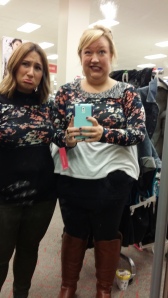 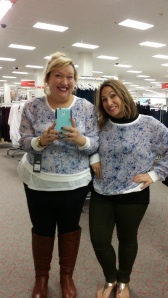 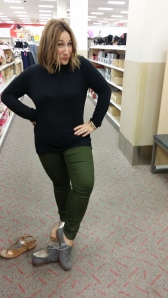 Being with this girl makes me feel so much better!!!  We love trying on the ugliest stuff and who needs a dressing room am I right ladies!?!  But we did find some total gems.  But then what…comfort eat!?

So, we had dinner at my favorite place…Coquette!  It was the most romantic dinner two little meatballs could ask for.  It was also one of our two monthly cheat nights….it was heaven!  Then we got a french silk blizzard from Dairy Queen #shame but it was the coldest little hug of yumminess!  But most of all  to feel better, I think Carrie would write about it… 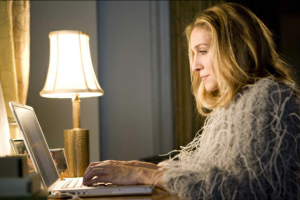 Writing down how you feel is such a cathartic thing…a total release.  Getting all of this out and then reading it back to yourself helps you process everything that happened and gives you such amazing perspective and peace.  I know that this has very little to do with paleo or workouts with a trainer but this is a little bump in my journey that I’m not going to let spiral out.  I have today to cry and then I’m moving on.  It was really hard to actually feel my feelings instead of turning to something else to make them go away.  It is ok to feel sad…but don’t wallow and know when to get out.

So in closing…a break up is sad but its also what is meant to be!  I’m choosing to walk away with fond memories and a better knowledge of what I want in the future.  Love you guys so much and thanks for the inspiration…turns out I’m a Carrie.

Your Source For The Coolest Science Stories

The leading Christian magazine in the United Kingdom, helping you connect with God, Culture and Life